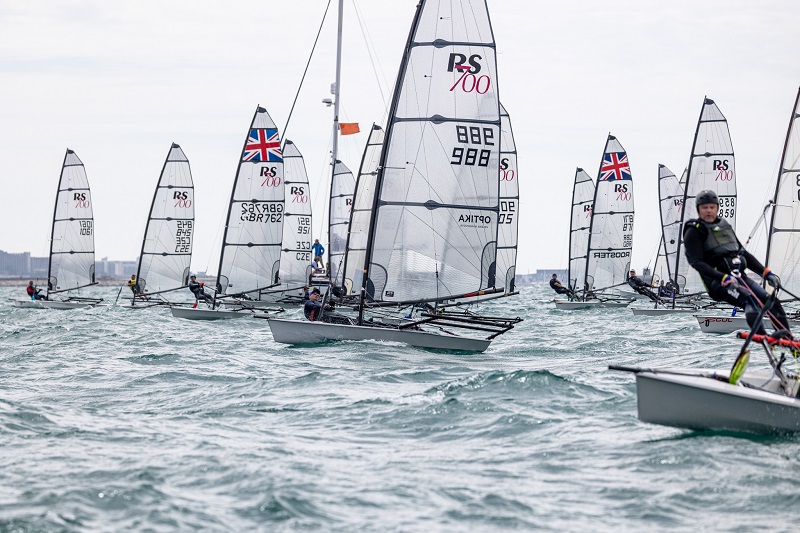 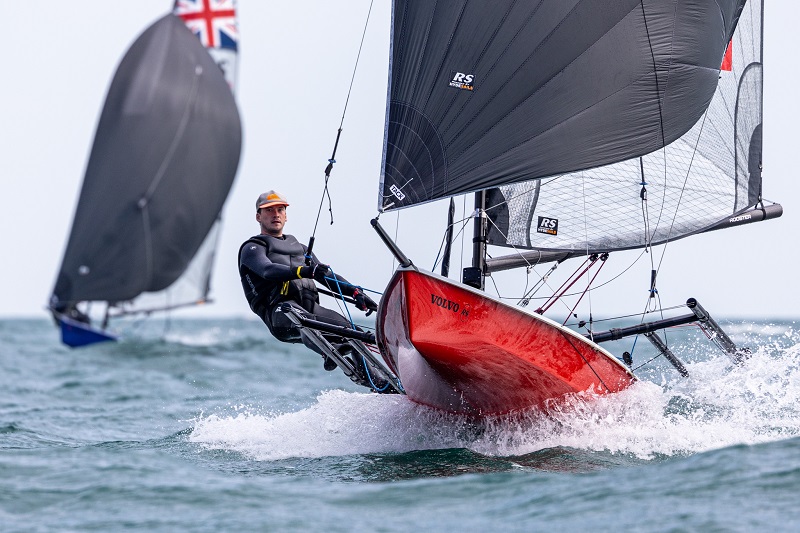 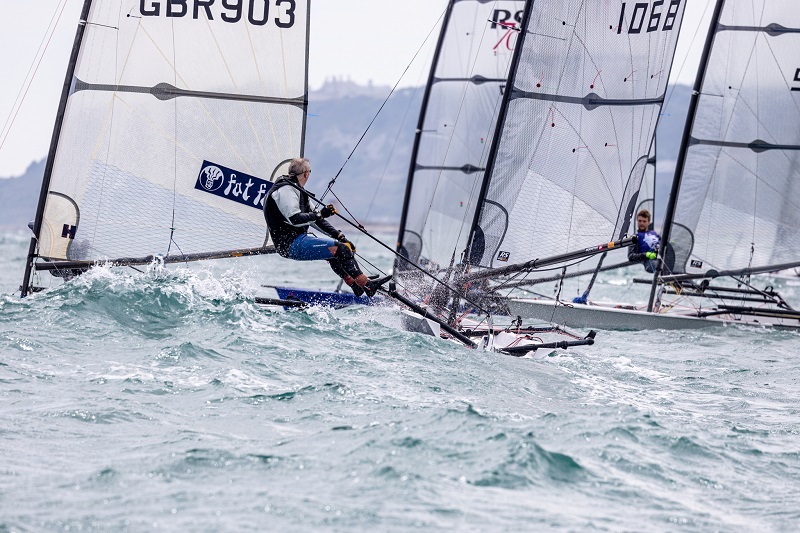 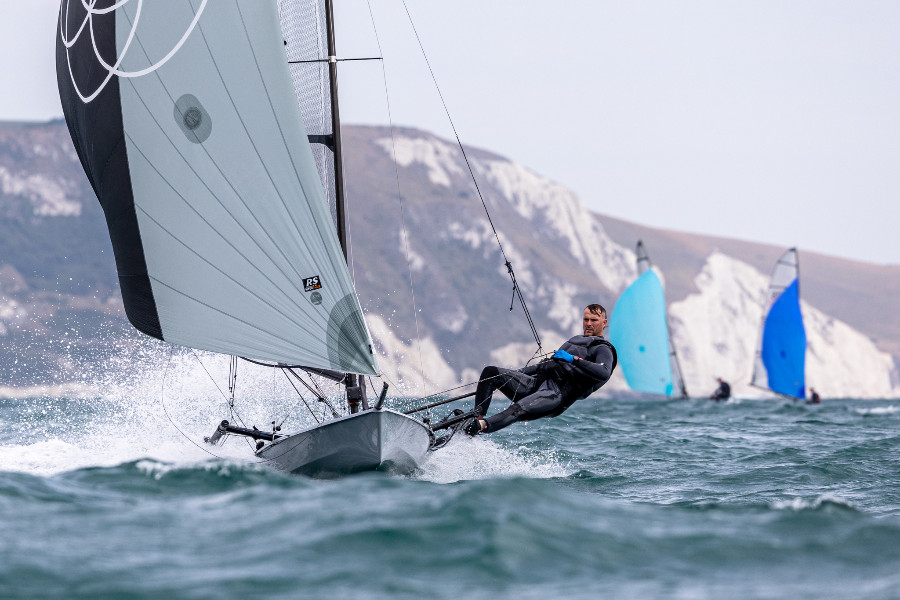 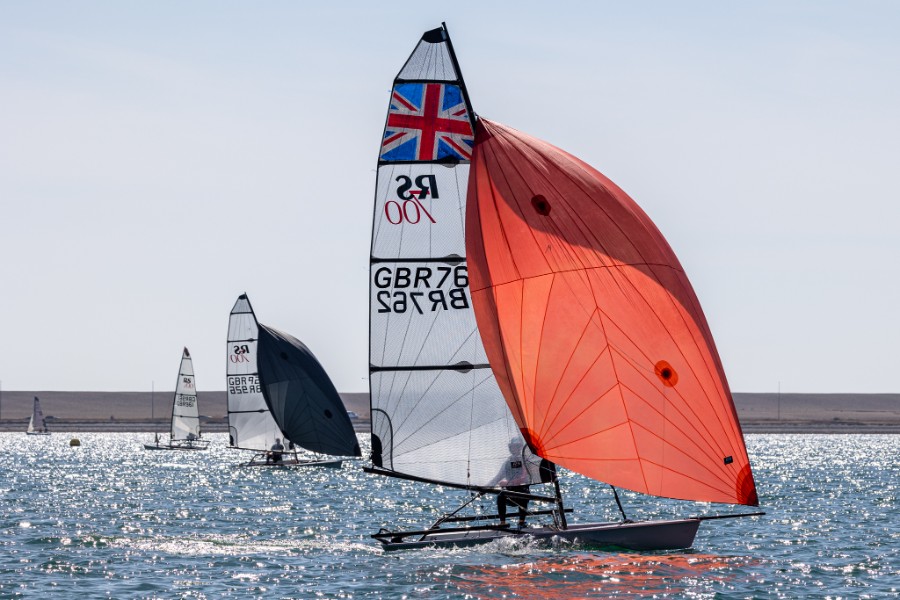 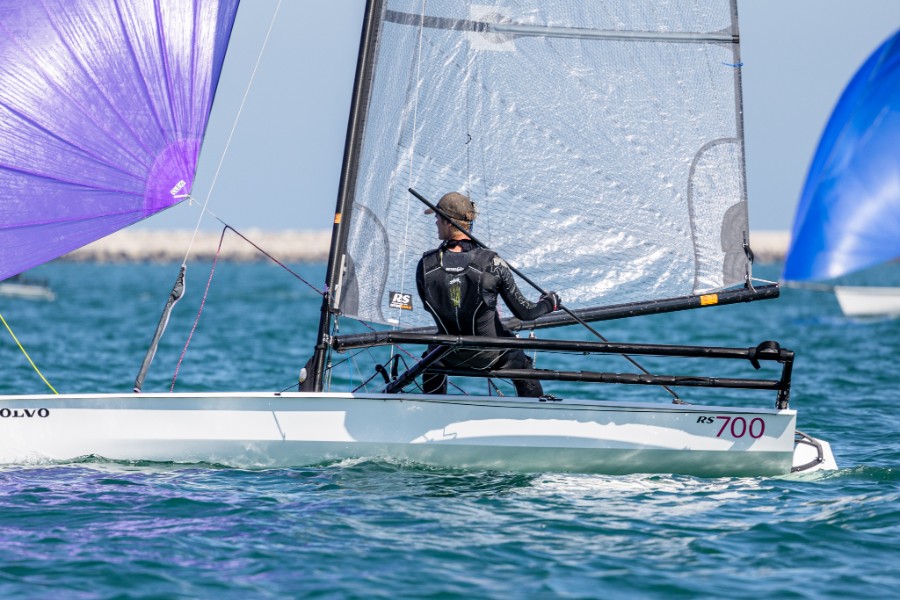 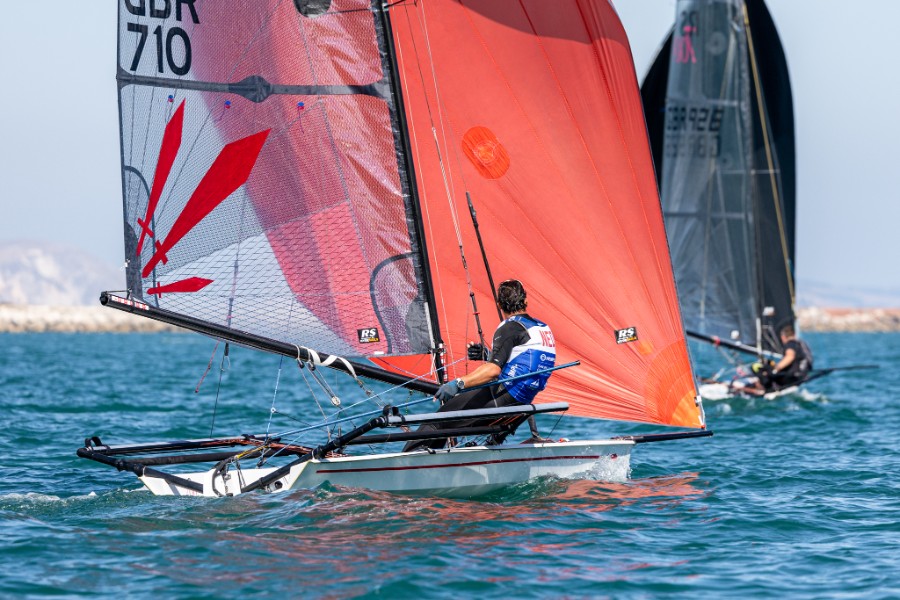 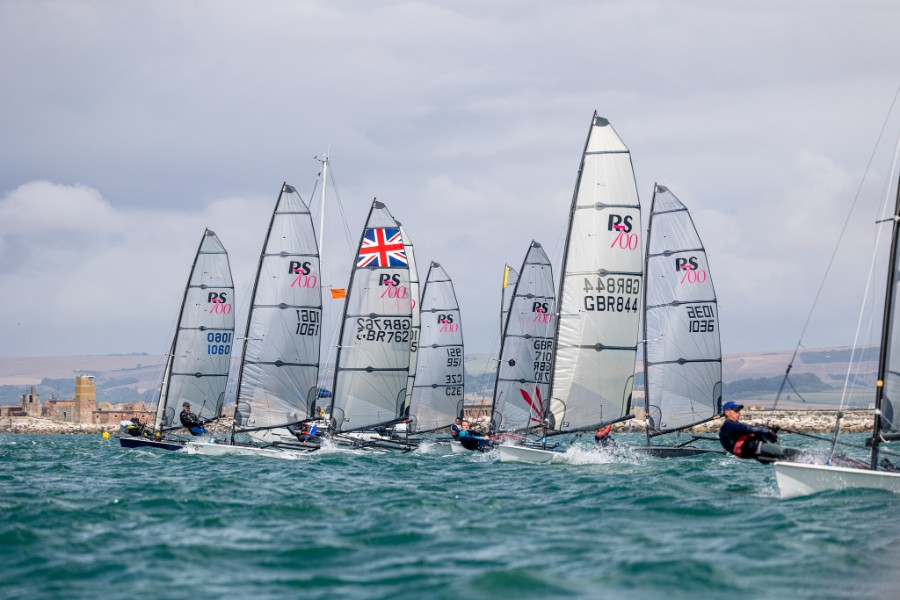 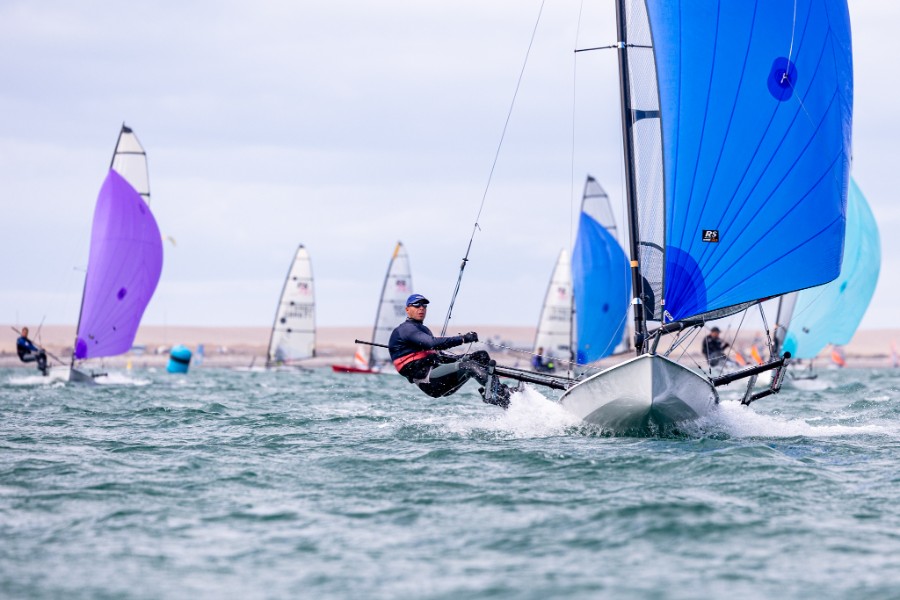 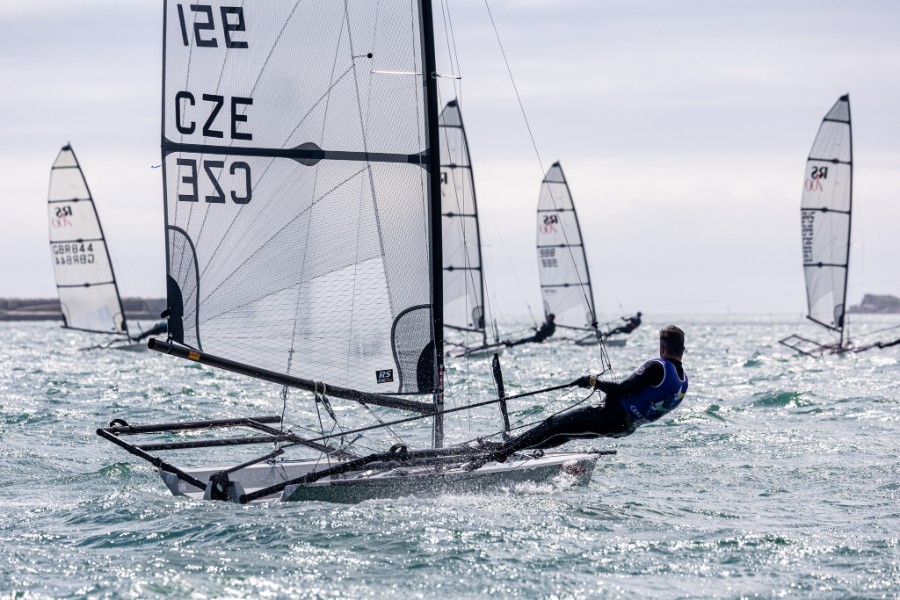 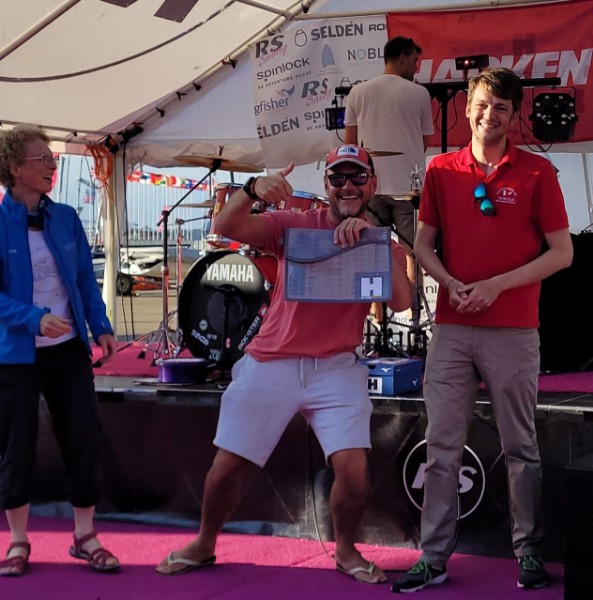 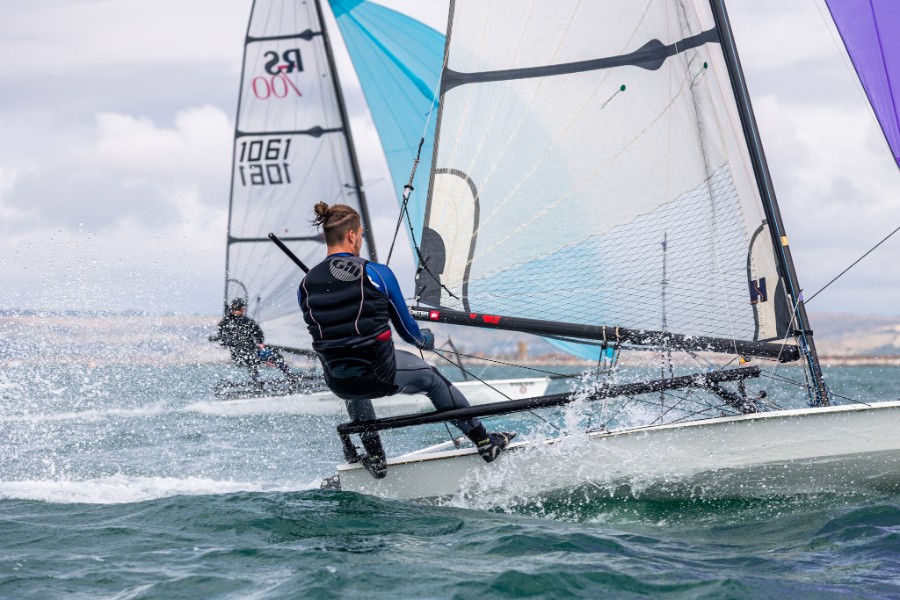 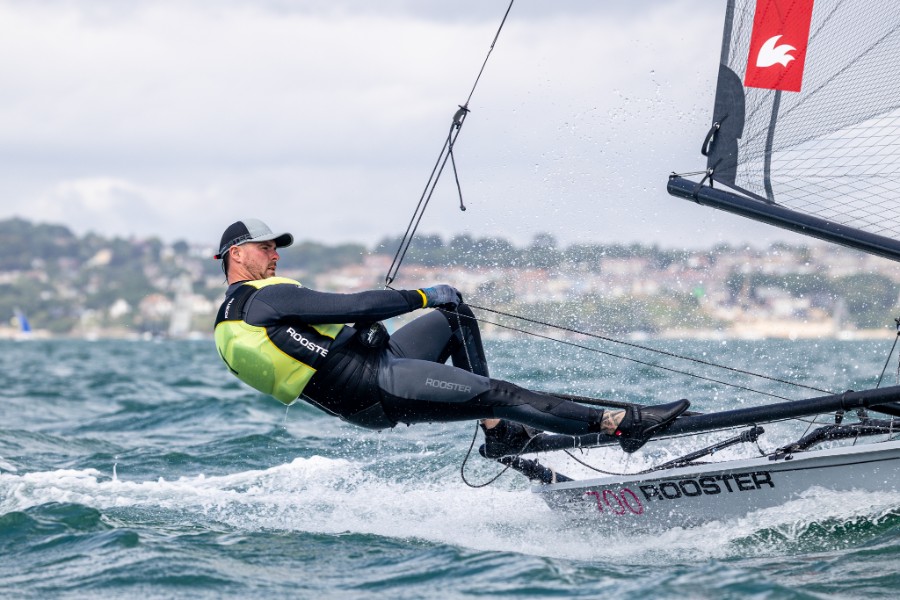 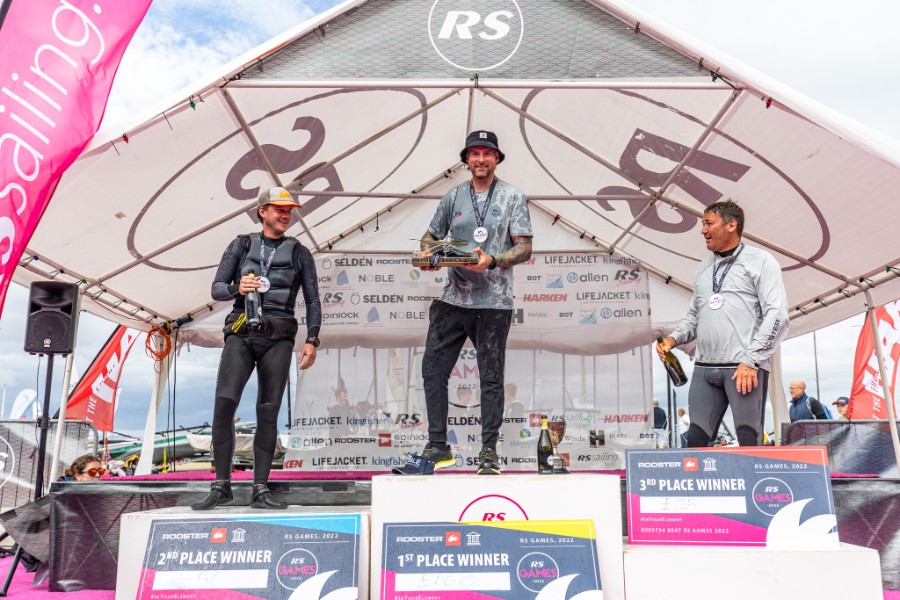 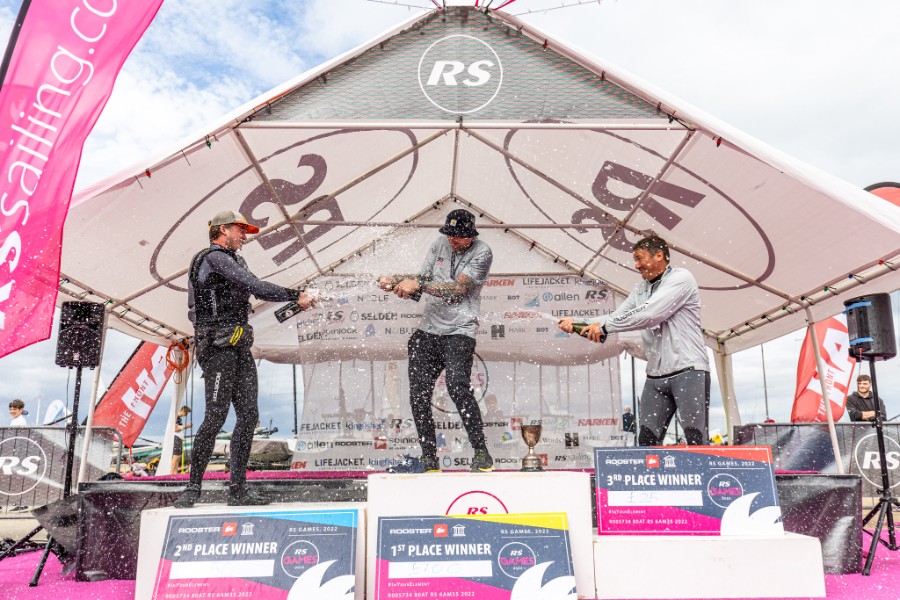 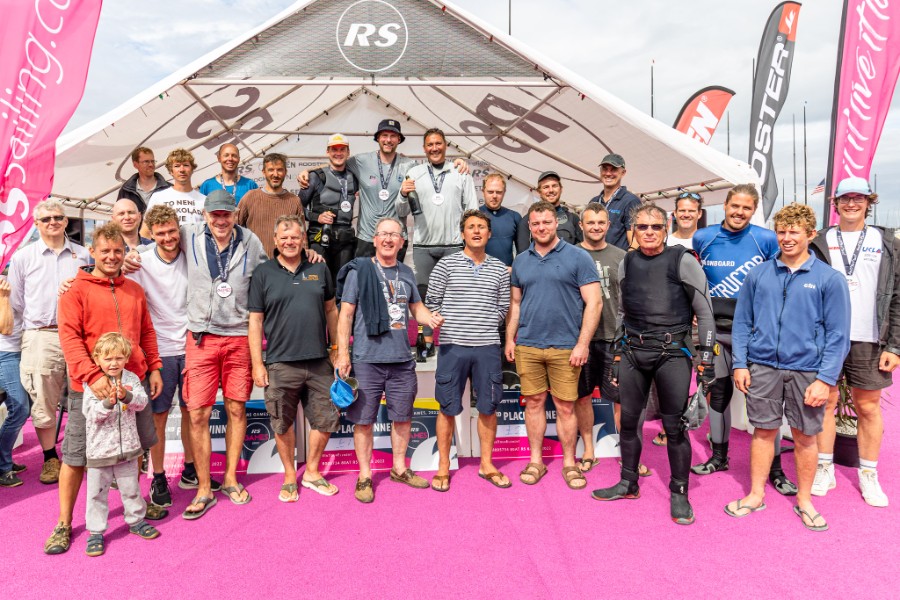 CONGRATULATIONS TO THEO GALYER YOUR 2022 RS700 EUROPEAN AND NATIONAL CHAMPION!

Well done to all our competitors for racing so hard across gruelling ten race regatta.

Thank you to our super event sponsors: Noble Marine, RS Sailing, Rooster, Hyde and Fernhurst Books.  Thank you to WPNSA for hosting us so splendidly.  And biggest thanks to our smashing race officer Tom Rushbridge and his super team for hosting such high quality racing in some properly difficult conditions.

31 RS700s arrived at the Weymouth and Portland National Sailing Academy for the European Championships and Noble Marine UK National Championships. The 31 includes five Czech sailors who made the 18 hour trip.

We sailed out through the harbour into Weymouth Bay.  Race one started cleanly and on time in 16 knots with big rolling swell making conditions challenging from the off.  Rob Higgins and Theo Gayler led off the line chased closely by Matt Conner.  Theo headed left while Rob went right splitting the fleet.  Rob made it to the windward mark first, followed by Matt Carter who was chased by Theo who ran into some weed slowing him down and Matt Conner round in fourth.  Matt Carter chased Rob hard downwind and up the next beat to round first only to fall out the back of the boat on the bear away!  That allowed Rob to round and Theo through.  Theo then chased Rob hard to the finish but didn’t quite catch him.  Rob crossed first with Theo second.  Matt Carter recovered to third with Matt Conner fourth.

The wind moderated slightly to 14 knots for race two.  Theo led up the first beat followed by Rob but Theo’s spinney sheets got caught up.  Rob charged to the leeward mark first with Theo second, and Matt Carter rounding next with Pete Purkiss hard on his heals.  Ben Copper followed but rolled in downwind.  The places didn’t change upwind and Rob led to the line, unfortunately missing the gate allowing Theo and Matt through to take first and second.  Rob turned around in time to take third from Pete.

Day two arrived with a light South Easterly breeze in the harbour but less wind in the bay.  The race officer kept the fleet ashore until a South Westerly sea breeze filled in in the afternoon.  In light marginal trapezing weather the first race got away in the harbour.  Rob Higgins lead the fleet up the left hand side to round the windward mark ahead of Pete Purkiss and the pack.  The second beat saw Rob going left and getting the wrong side of a shift while Adam Phlon showed great speed on the right hand side to round the windward mark in first which he held to the finish.  Pete held onto second and Matt Carter came through to third with Rob in fourth.

There was no variation in conditions for the second race but the RS700 fleet was treated to the outer loop course for the first time which introduced tight spinnaker reaching legs which mixed things up a bit.  Michal Kotek showed great speed and following some place changing with Pete Purkiss came out on top with Pete second and James Clark in third.  The racing was close and Theo Galyer pulled through to fourth place enabling him to maintain the overall lead in the championship.

With wins for Adam Phlon and Michal Kotek the CZE team had a fantastic day.

Day three was very much in expectation of the decent breeze, which was expected to increase throughout the day.  Four races were scheduled in Weymouth Bay and day three was a windward-leeward course for us.

The race started in increasing wind, but it died down again as the race progressed.  This was not a problem for Theo Galyer though, who dominated all four races today and was followed by Rob Higgins.  Well done guys!  The wind picked up as the day went on but it was definitely not what was forecasted.  The waves built up throughout the day so it was good surfing in the last run.  The left side of the course was mostly favourable with the tidal current coming from the left.  Today was a day of early starts.  The 31 boats were always very eager and we could see X-Ray flag on all the starts.  Misfortune clung to the heels of Ben Cooper who was OCS twice today and once had to retire due to a dropped sail.  Pete Purkiss also scored two OCS and lost his third place overall.  Hats off to the race team who did all the races back to back and it was a very good decision to shorten race four after the second round on the windward mark, saving us the energy for the last two races on Sunday.  And it's going to be windy!

A solid forecast of gusts of 20 knots was superseded when the RS700 fleet started peeling their covers off Sunday morning.  It was averaging 25 knots on the harbor wall and some slightly worried faces set a mood in the camp.  A discussion was had with management about the worry of an increasing forecast.  The main issue was the amount of safety in place alongside space to run a trapezoid.  After a suggestion of sharing an inner loop with the RS800s was made a coin was flipped.  The result was the RS800s would do two races on the inner with the RS700s to go out on the same course after them.  At this stage a couple of boats thought their time at the event had come to an end and a few undercovers were produced.

However the majority of the fleet were keen and people changed into kit with strong intentions to make the most of the last day.  It was an eventful launch with a dead offshore.  One boat decided it was going to launch without its owner before the class was released!  This provided some entertainment as John Lawson threw himself into the water showing immense front and backstroke techniques.  A rib in the marina took pity and rescued John and his boat!

The race officer was true to his word and got the RS700 in sequence very promptly.  This was gratefully received as the pound coins were visibly shaking off peoples championship mains!  The race got underway in a steady 20 knots which had moderated from earlier and continued in this fashion for the rest of the day. Theo Galyer had the committee boat to himself whilst the bulk of the fleet were flying down the line at speed perhaps due to the F flag.  Matt Carter tried hard to roll over the top of Rob Higgins who decided to crack off and go for speed.  Theo held a clear lead at the windward mark and held on to this for the rest of the race with Rob and Matt in tow.  Ben Cooper fueled with rage after some tough points scored on Saturday cruised into the line comfortably to take a 4th.  Czech boat Michal Kotek proving consistency came in just behind to take 5th.

A couple of boats were timed out and the race officer got things going quickly again.  By this point the wind was more like 18 knots sometimes entering the low 20s.  Theo started committee boat again whilst Matt and Rob were middle of the line.  Theo tacked early rather than hitting the lay line and it cost him.  Although he rounded first Rob was one boat length behind him at the top and Matt in touching distance of Rob.  A quick kite set from the top two meant a fast blast down ‘Death Alley’.  The wind was funneling down the side of the naval ship.  Theo didn’t like the look of the situation and decided on an early gybe with the intention of ducking behind Rob.  Rob showing some concern at a boat gybing on to port next to him came off the wire and slowed right down.  Theo tried to park it, as eye contact was made it was clear Theo needed to avoid the collision.  A gybe back on to starboard resulted in a capsize (well received by half the fleet of course).  Having done the maths Theo decided to head into the shore with a smirk on his face. Rob and Matt battled it out and perhaps Karma was dealt at the end of the race when Matt nailed the lay line and came storming through with his kite up to pip Rob on the line.  James Clark came in behind with his second top three of the event which bumped him up to top five overall and on top of this snagged himself the silver trophy.

Overall the fleet had a really good event at the RS Games and will look forward to returning again in four years’ time!  Massive credit to the RS team who manage to cope with huge amounts of boats in a very short space of time.  Thank you to our super event sponsors: Noble Marine, RS Sailing, Rooster, Hyde and Fernhurst Books. Thank you to WPNSA for hosting us so splendidly. And biggest thanks to our smashing race officer Tom Rushbridge and his super team for hosting such high quality racing in some properly difficult conditions.

I personally want to say thank you to Clare Sargent (RS Class Association Secretary) for all the hard work she puts in time and time again at the events, it wouldn’t be the same without her and it has been a pleasure working alongside you.  Also thanks to all the friends who sailed or still sail the RS700, long may the friendliness of the class continue.  Best of luck to Matt Carter the new class Chair who is perfect for the job. That’s me signing out for now.