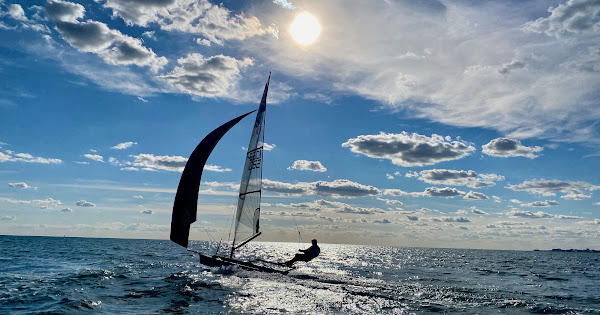 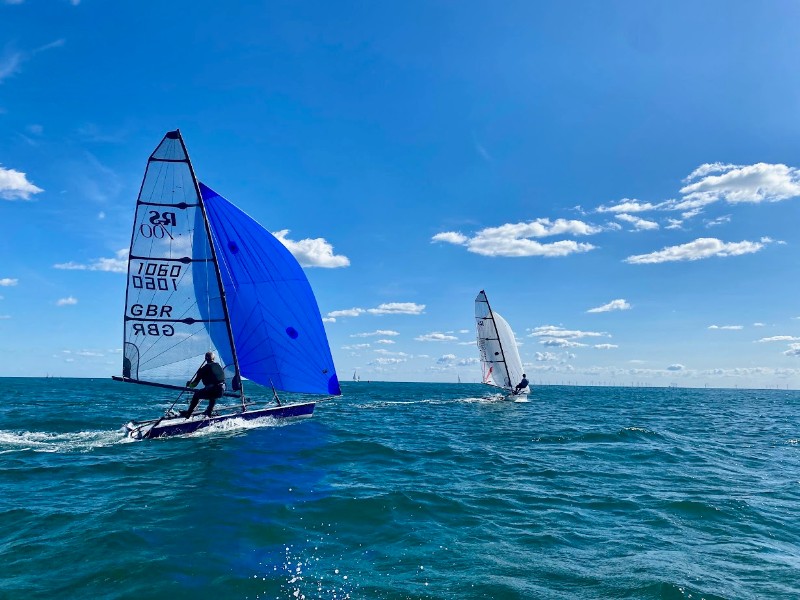 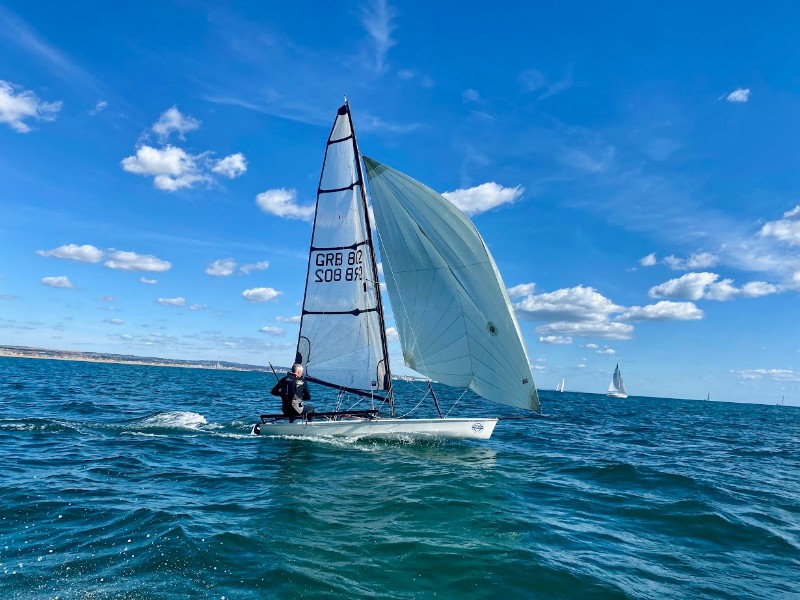 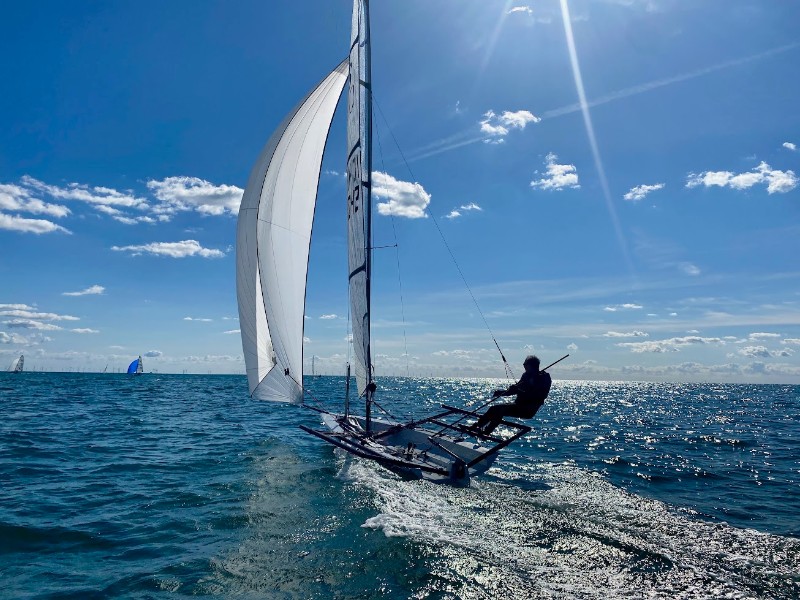 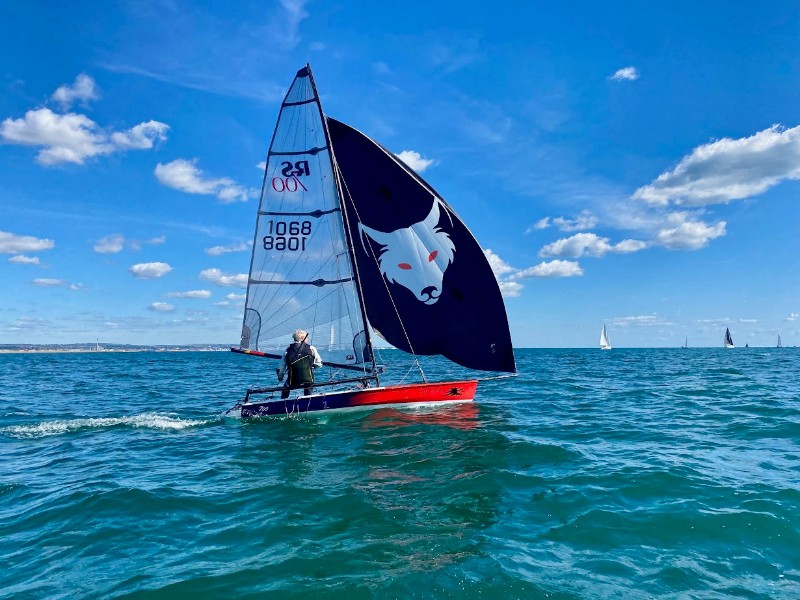 With promises of rolling swell and prevailing South Westerlies, the RS700 fleet were excited by their first excursion to Lancing Sailing Club, for the penultimate event of this year’s Rooster National Tour.    However, when the competitors arrived to a warm welcome from both the club and the bright sunshine, it was a flat sea and a Northerly wind settling in for the weekend.

After observing a minute’s silence to mark the passing of Her Majesty Queen Elizabeth, the competitors were briefed by Race Officer Barry.  There were promises of black flags should the fleet misbehave in their starting.

The fleet were soon released, popping their kites up to head downwind to the starting area.

As instructed the fleet started cleanly first time.  It soon became apparent how shifty the breeze would be as it flowed across the South Downs.  Regularly oscillating across 40 degrees, it was important to keep an eye on the compass or be very lucky with choosing a corner.  Local hero Matt Carter showed his familiarity with the area and led the fleet to the windward mark, shortly followed by Chris Wright.  Carter retained the lead without significant challenge for all four laps.  The battle for the remaining slots was hard fought, as the sailors tackled the shifts and holes in the breeze.  By the end it was Nathan Steffenoni and Matt Conner who came through for second and third respectively.

The conditions remained consistent with 8-12 knots of oscillating breeze.  This resulted in a strong pin-end bias to the line as the gun went off and a few people chanced their luck with port tack starts, some more successfully than others.  Soon after the start the wind flicked back and those who had headed hard left were favoured coming in for the first windward rounding.  It was ‘Pistol Pete’ Purkiss who made it first, closely followed by Matt Carter, Andy Wright and Nathan.   Pete held Carter off until the very last run, where Carter put the hammer down and added a couple of extra gybes to just get ahead for another win.  Matt Conner worked through the fleet to take third.  A late capsize at the final gate from Andy Wright let Nathan through to take fourth place.

With the competitors already feeling the leg burn from the variable conditions, it was time to set off for another four lapper.  A clean start and the fleet soon headed off left for the higher pressure.  It was Carter then Pete first to the windward mark, with a bunch close behind.  Andy Wright found his pace and had some good battles with Matt Conner and Nathan.   With Carter seemingly enjoying the conditions so much, he led most of the fleet around the course for an additional lap, leaving the counting skills of Curtis Drew to pay dividends as he correctly crossed the line and bagged the bullet whilst the leaders were beating off into the distance.   Chris Wright also got it right and upgraded his position to a fourth place.   Face palms for many, smug grins for two.

Overnight it was Matt Carter in first, Pete Purkiss second and Matt Conner third.   The points were close across the board and with a discard applying the following day, things could easily turn around.

After racing the sailors were treated to fantastic hospitality at the club, with food, drink and a glorious sunset.

With the forecast of touch more breeze sticking from the North West, the fleet felt well-rehearsed for what was ahead.  Across the day the wind flicked back and forth between the West and North and varied between 8 and 15 knots, giving some fantastic conditions.

Clearly wanting to see a bit more action at the gun, the race team set a short line to keep the fleet tightly packed.  The helms still found their slots without incident with only Rich Priest finding himself squeezed over and having to round the end.

A 50/50 split of boats heading left and right up the first beat, with right paying off heavily this time.  Despite his false start, it was Rich Priest who was first around the windward mark with a close pack of Pete Purkiss Nathan, Gary Austin and Roland Smith on his tail.    Rich held his lead until the final windward mark of the three-lap race, when a capsize allowed Pete, Nathan and Conner through to head for the finish line in that order.

There was no sign of Class Chair, Matt Carter.  Rumour circulated that he’d headed back to shore in a strop.

Whilst waiting for the wind direction to settle, the race committee took the opportunity to reset and extend the race course by an extra half mile and upped the laps to four.  This gave time for Matt Carter to make it back out to the start line.  It transpired he’d actually gone ashore to replace a broken kicker strop.  But, with his discard now used up and Pete taking a win, the points were now getting very close.

With a slight pin end bias the fleet pushed towards the far end of the line as the gun went off.  This firmly closed the door on Curtis Drew’s aspirations of a port tack flyer, resulting in an a very early swim for him.  It was game over for Andy Wright who picked up an OCS.

First to the windward mark were the Matts - Carter, then Conner, positions they held on to the end, the race having been shortened to three roundings, given some of the back markers were now getting lapped.   In third it was Nathan and then Rich Priest next in line.

Our final race of the weekend was set for two laps, the race officer keen to make sure to allow time for a long beat home.  There were clean starts for all, with some port tack heroics pulled off by Roland Smith.    With the left side paying this time, it was once again Carter and Conner to hit the first mark ahead.   Carter’s kite halyard let go on the first run, letting Conner and Nathan through.  Expressions as blue as his boat could be heard as they flew past.

As had been the case all weekend, being on the correct side of the shifts could make or break a race.  And in the last race it was ‘Pesky Pete’ Purkiss who had the honour of a 30 degree lift to take him from mid-fleet to first place at the second windward mark, just getting ahead of Conner and Nathan who approached from the opposite tack.    Pete held on to the finish line, leaving Matt Conner in second, Nathan third and Matt Carter picking up a fourth place.

The fleet returned to shore to be met by the ever-helpful shore team.    A tally of the scores showed there were just five points between first and fourth place, showing how close the racing had been.  With prizes awarded to the top three results it was Matt Carter in first, Pete Purkiss taking second and Matt Conner taking third.

The sailors expressed thanks to the club for hosting an excellent event across the board, from the race management to the shore team and hospitality.  We hope to return in 2023.

Our next and final stop for the year is to Chew Valley SC for the Rope4Boat Inlands 22-23 Oct 22.  With a strong set of home sailors and an event shared with RS100s and Musto Skiffs it is set to be a fine ending to the year.   Event info and online entry are here