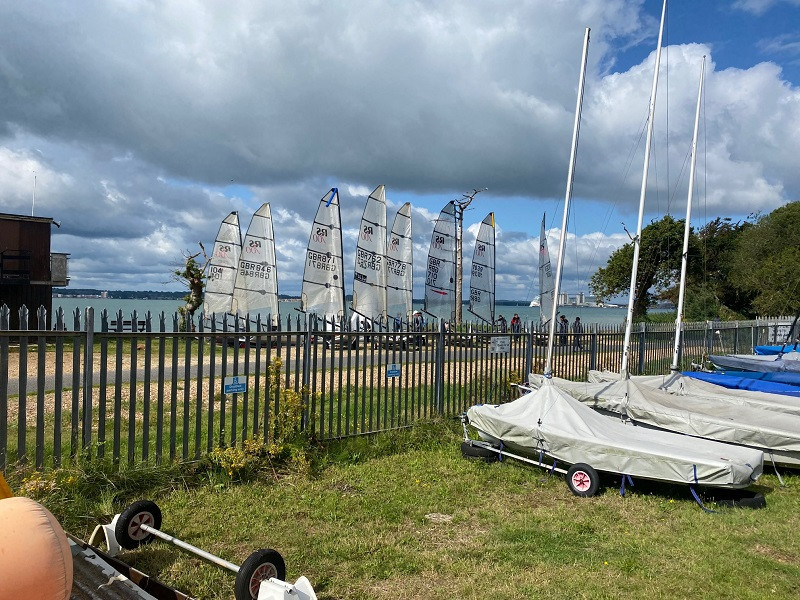 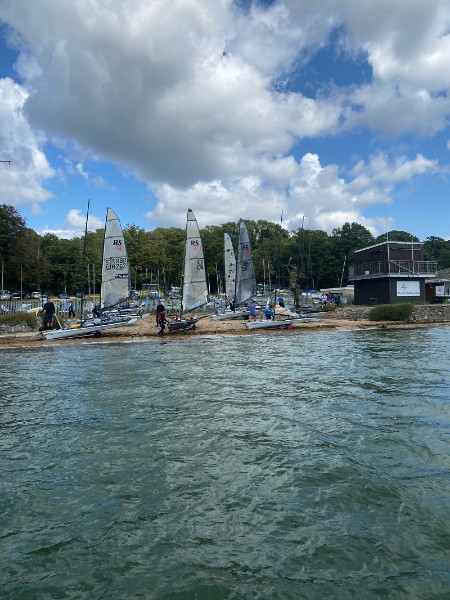 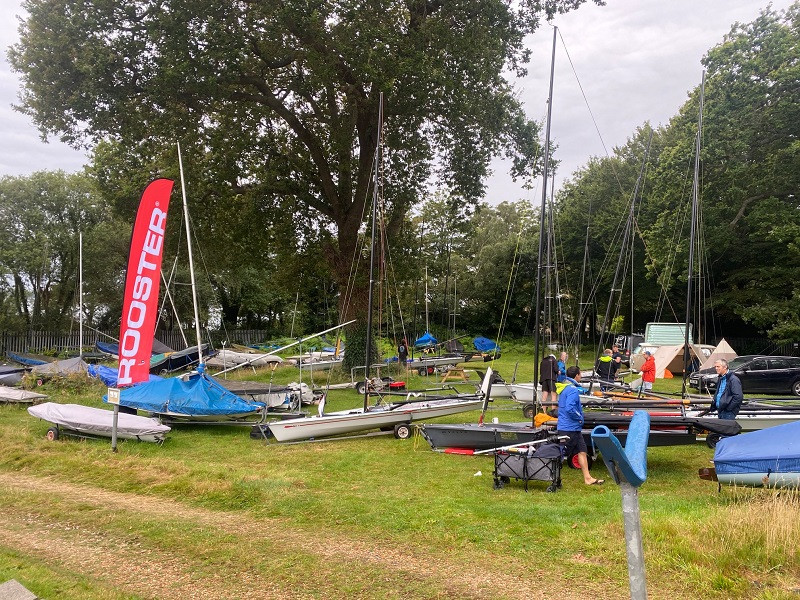 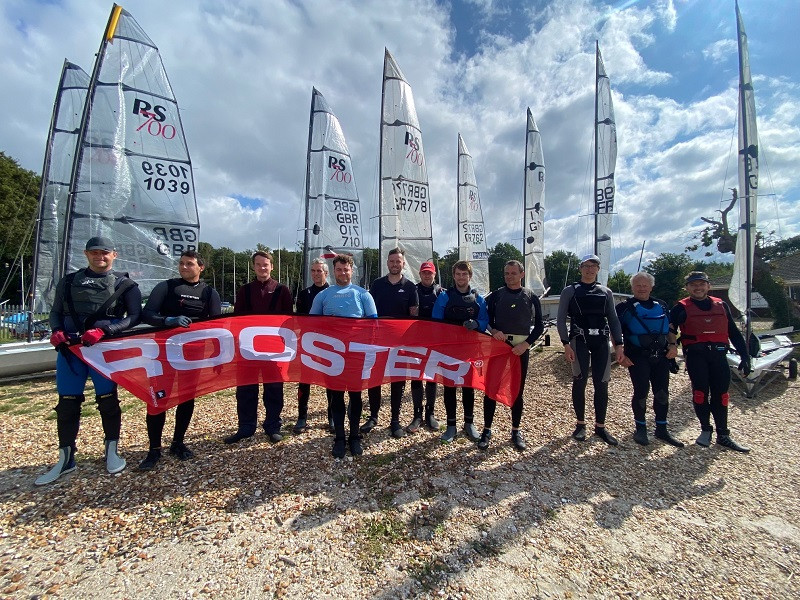 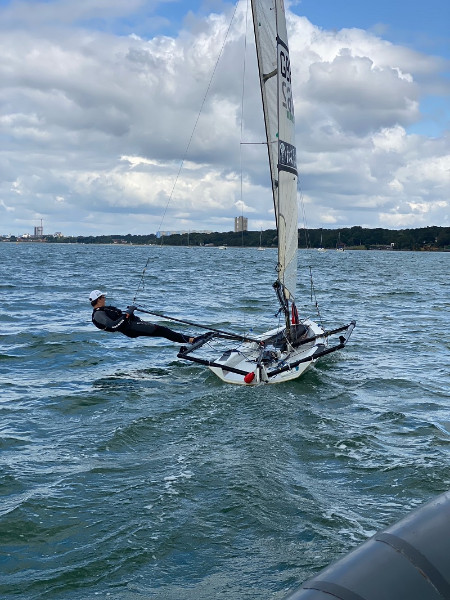 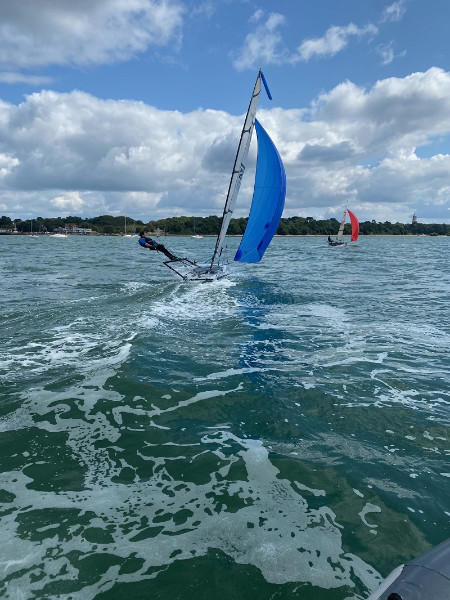 An enthusiastic fleet of RS700 sailors gathered at our host venue, Weston Sailing Club, last weekend for what would end up being a very important training event in the RS700 sailing calendar.  Our pre-nationals training!

Weston shore was soon to be scattered with high-speed skiffs, tacking and gybing in the hope of tuning their skills and perfecting their boat speed in anticipation of the upcoming Noble Marine National championships at Castle Cove Sailing Club 9-12 September.

Our UK Chair Theo Galyer and Gold fleet sailor Rob Higgins, the instructors for the weekend, began the training session with a return to the basics of skiff sailing on shore.  This allowed everyone to reflect on their own boat handling techniques and was an excellent opportunity for our instructors to gauge where each of the sailors might have required attention and what everyone excelled in.

As our short introduction was underway, the breeze began to take shape and started to settle in from the South West blowing 10-15knts – just perfect for putting all our theory into practice.

By mid-morning, the sailors were ready to put that theory into practice and hit the water.  To begin with some upwind “follow the leader” drills.  As the instructors made their way through the fleet, giving instructions, their eagle eyes and tutorship were starting to bear fruit with everyone showing more determination, speed, stance, and improved sail trim.

A brief lunch break preceded a “Start practice” session in the afternoon to allow everyone to practice some new techniques and time their acceleration off the line.

As the tide at Weston shore started to run out, the end of the day gave way to a friendly BBQ in the club grounds.  A few sailors decided to use the down time to sort out a few technical issues with their boats, including our friendly sailor Guy, who had to perform an emergency Epoxy repair on his rudder gudgeons which had failed him during the later part of the day.  Once again, the BBQ proved to be an essential part of the event as the grill doubled up as a heater to help the epoxy repair on his boat set.

The Sunday began earlier in the morning with some of the fleet making modifications on shore to their control systems having got an improved feel of their boat and handling changes they wanted to try out.

When everyone was ready, Theo and Rob laid out the plan for the day – With the breeze a little lighter in the 8-14knts range but from the NorthWest, downwind “follow the leader” drills were the roll call for the first session.

Some solid improvements in boat handling were seen across the fleet as all the sailors felt their confidence boosted by the previous days training and now, we got a good glimpse of some rapid kite hoists and some very smart gybes.

Ashley Strong demonstrated a very skilled emergency capsize to save his rig when one of his shrouds broke while sailing - almost causing his rig to collapse and break.  After securing his rig safely upright, and getting a tow ashore, he dedicated himself to quickly installing a temporary replacement during the lunch break.  Nothing would stop him from completing the training session, not even technical failure of that magnitude.

Following the rest and recover lunch break, everyone was eager to finish off the day on a high and it was decided to run a small series of sprint races.  This would allow all the sailors to put everything they learnt to the test.

A start line was set and off the fleet went on the first of five high intensity races.   Straight out of the box with a great start Andrew Wright showed excellent form with good tacks up the beat and a confident downwind performance.  He immediately set himself up as the sailor to beat.  Local boy Nathan Steffenoni held in second followed by a very persistent and consistent Simon Hawes in third.

Race two went to Curtis Drew who brought his A game to the race displaying excellent control of his boat handling skills throughout the race giving him a well-deserved win.  Nathan again crossed in second place by a very small margin as Elliot Booley gave an impressive performance and secured himself the third position after really excelling throughout the race.

Race three was a close battle between Andrew and Nathan who both wanted this race win. Eventually Nathan managed to prevail with some good boat handling on the downwind leg as Andrew held on to the second position with Malcolm Streeton completing the podium with a well-deserved third.

In race four Andrew demonstrated his consistency.  Good starts and well-called shifts were enough to give him a net advantage and he took the first position with ease.  Richie our young ex-29er sailor finally had an opportunity to show-off everything he learnt from the weekend and took home the second place, followed by Malcolm who was starting to excel at his starts and get a good lane up the first beat.

The final race for the day was made longer to give all the sailors an “all or nothing” chance to top the results.  For the leaders Andrew, Curtis and Nathan this was the last chance to score big.  With a very short and port bias start line, Nathan was determined to get at least one good start and managed to pull off a port tack start heading in the right direction.  Unable to shake Andrew off completely, by the top mark they were both close enough that it was all still to play for.  Both ended up capsizing downwind as they succumbed to the pressure.  The second pack of sailors were starting to catch up and Curtis and Richie were not yet out of the podium chances.

After recovering, Andrew and Nathan both rounded the leeward mark for the final beat upwind within a few boat lengths of each other.  With a small local advantage, and a well-timed tack, Nathan managed to get in front of Andrew to make the windward mark again in the lead but his kite failed to launch properly and it was a costly capsize for him handing the race and the series to Andrew. Richie who placed himself in the leading pack with some good sailing crossed the line second and Curtis managed to secure himself the third place in the race.

It was a well-deserved win for Andrew Wright as he demonstrated how good sailing fundamentals and smart sailing combined with some newfound confidence, always take home the prize.

With the training series ending, everyone’s exhaustion was proof that Theo and Rob pushed us just enough to get the sailors shipshape for the upcoming Nationals at Castle Cove.  A big thanks to everyone for having participated in such a good training event.  The weather gods were kind enough to bring some of the best training conditions possible.  Our instructors Theo and Rob did a fantastic job and Weston Sailing Club provided the perfect atmosphere for everyone to make the most of the event and hone their skills.  Thank you very much to Rooster for sponsoring the event with free tell-tales for all the sailors.  We can’t wait to put our newly honed skills to action on the RS700 Rooster National Tour.

We look forward to seeing everyone soon on the water in Weymouth at the Noble Marine RS700 Nationals 9-12 September.